Of all the actresses I researched and wrote about in Dangerous Curves atop Hollywood Heels, none have stuck with me more than Lucille Ricksen.

Her death in 1925, at the age of 14, still troubles me. I grieve for the loss of a teenager who became one of the first causalities of Hollywood. If ever there was anyone who was helplessly sacrificed to Hollywood, it was little Lucille, who, at 13, was dubbed the “Youngest Leading Lady” in moving pictures.

Our story begins in Chicago.

Under the direction of her mother, Ingeborg, Lucille’s career began almost from the time she could walk.

Lucille first worked as a professional model in Chicago.

From modeling,  Lucille worked on the legitimate stage for about a year. Then, Ingeborg took her five-year-old daughter to the Essanay Studios, where she signed her up for film work. She was cast as Baby Ericksen in The Millionaire Baby (1915).

By the late 1910’s, Ingeborg’s marriage was on the rocks. Sensing her fortune lay in the Golden West, she moved Lucille and her brother, Marshall, from Chicago to Hollywood and put the family to work.

In no time, producer Samuel Goldwyn signed Lucille to appear as the dainty sweetheart of Johnny Jones in Booth Tarkington’s Edgar comedy series.

For Lucille, it was like playtime all day. She could be mischievous and rambunctious in one scene or sweet and sentimental in the next.

Lucille loved her work. She wrote a letter of appreciation to her director, E. Mason Hopper, calling him the “most patient child’s director I have ever known.”

In 1921, Lucille and Marshall, along with a number of the cast members of the Edgar series, were cast in The Old Nest, a film based on a short story by Rupert Hughes, Howard’s uncle. When the shooting was complete, Lucille was taken on a tour around the country to promote the Edgar series.

Although the schedule was grueling, Lucille had the time of her life. She diligently documented the summer in her scrapbook. She carefully pasted the newspaper clippings to the pages and wrote creative captions for each photograph.

For the next year or so, Lucille continued to mature on the big screen. By the time she made The Married Flapper (1922) with Marie Prevost and Kenneth Harlan, the 12-year-old looked the part of an adult.

The publicity machines went into high gear in 1923 when director Marshall Neilan chose Lucille to play the lead in The Rendezvous. Although not quite 13 years old, the studio and press declared her to be 16. She became “the youngest leading lady in movies.”

In The Rendezvous, Lucille plays the unhappy wife of a Russian official. One visiting reporter to the set noted how strange it was to see Lucille in the leading lady role. “Those Edgar Comedies were Lucille’s only childhood–the only chance to play with children her own age. That is what makes her different. It is almost uncanny how different she is. It makes you sorry and it makes you glad.  You long to see those pigtails flying in the wind and the cheeks snapping with bright color, instead of the all-day session playing the abused wife of a “horrid” Russian, interpersed with reading about Bernhardt and talking with older men and women.”

Equally disturbing — to me — is her revelation that Marshall Neilan (her director) and Sydney Chaplin, who was also in the film, were two of her new best friends. Disturbing, because of their reputations as Hollywood “bad boys” and skirt chasers.

Moreover, in December 1923, The Billboard noted that Lucille and Chaplin had recently married.

It is doubtful, given Lucille’s age and the watchful eye that Ingeborg hopefully kept on her daughter and breadwinner of the family.  My research failed to uncover any marriage certificate for the two in Los Angeles in 1923.

Through the first half of 1924, Lucille went from picture to picture at an alarming rate. She completed an astonishing 10 features in a little over seven months.

The grueling pace finally caught up with the teenager. That summer, while her films were being released, Lucille was fighting for her life. While the movie-going public was building her up, Lucille was secretly breaking down.

Ingeborg sent Lucille into seclusion, hoping that a few months of rest would make her good as new. Despite her best efforts, news about Lucille’s emotional breakdown leaked out.  Her mother offered little information.  “Nervous breakdown–that’s all. No, she can’t think of working now–not for four months at least. She must have rest–lots of it. After that, perhaps.”

Lucille’s doctor was more candid. “Miss Ricksen is a high-strung enthusiastic girl, full of ambition and energy,” Dr. J. F. McKitrick said. “She crowded too much work into too short a time, and overtaxed her capacities. Other youthful stars have done the same thing.  The result is that she has had a complete physical and nervous collapse–so complete that she has not rallied from it as she should.”

With no money coming in, Marshall Ricksen quit school and found work to support his mother and sister.

One morning before daylight, Ingeborg thought she heard Lucille cry out for her. As she was speaking to Lucille and adjusting her covers, Ingeborg collapsed over her daughter’s bed. Lucille’s screams brought Marshall running into the bedroom. He tried to lift his mother from atop Lucille. It was no use. Their mother was breathing her last. “Take care of yourself, dear,” she said. Ingeborg died two days shy of her 45th birthday. 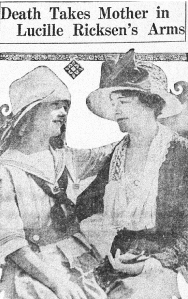 Lucille sank deeper into despair. Their Hollywood friends came to her aid. Paul Bern made sure Lucille had around-the-clock nurses. Actress Lois Wilson sat by her bed for hours at a time.

Samuel Ricksen, their father, who lived nearby, reappeared to offer his support. Lucille and Marshall asked actor Conrad Nagel and Rupert Hughes to become their guardians.

Three weeks after her mother’s death, Lucille, surrounded by her brother and Lois Wilson, gave up her fight for life.

Following an Episcopal service, the ashes of Lucille and her mother were placed in a bronze urn and interned at Forest Lawn (Glendale).

Lucille’s death certificate gives pulmonary tuberculosis as the cause of her death. Newspaper accounts blamed a nervous breakdown brought on by overwork. Contemporary references have cited a botched abortion as the contributing factor.

The bright spot of the story centers around Lucille’s brother, Marshall. With the support of Conrad Nagel and Rupert Hughes, Marshall enrolled in the University of California. He majored in law and became a successful lawyer in the San Francisco area.

His two twin boys also became attorneys. Their father never talked about the devastating losses of his mother and sister. The memories were too painful.

Little Lucille Ricksen crammed a lifetime of work and living into 14 short years. She was exploited by an industry that thrived on make believe. Her innocence was snatched before its time. In real life, she was rushed hurriedly through her childhood and bypassed the years one needs to become an adult.

As the breadwinner of her family, she was cast in adult roles in rather complicated adult situations, but she was still a kid at heart. Her mother, perhaps struck blind by the Klieg lights of fame, waited until it was too late to pull her little Lucille to safety.

Note:  Thanks to the Ricksen family for making Lucille’s scrapbooks accessible during my research.  Most of the images in this blog entry are from those treasures.