Life is Good at Hollywood Forever: A Chat With Karie Bible, Tour Guide

If you know me at all, you know I like to hang out in cemeteries. I’ve haunted graveyards all over the world, but my absolute favorite is Hollywood Forever Cemetery. In the middle of crowded and congested Hollywood, it is a haven of rest, for sure, but also a lovely park and a place to spend some quiet time with the Hollywood greats.

The truth is, friends, I’d rather be here than at Universal Studios or Disneyland — any day!

When I’m in Los Angeles researching a book, my pattern is pretty much the same. I have breakfast at Denny’s on Sunset and Western, then head down to Hollywood Forever to walk around and let the bacon and pancakes settle. Then it’s off to the Academy Library for a day of research.

In 2013, I was a guest speaker at the annual Valentino Memorial Service at Hollywood Forever. I was so excited to meet Karie Bible, a devoted film historian who leads the Hollywood Forever Cemetery Walking Tour. As I figure it, she just about has the coolest job imaginable.

Michael: How long have you been tour guide at Hollywood Forever?

Michael: My first trip to Hollywood was in the mid-1980s. Then it was Hollywood Memorial Cemetery and was among the first places I wanted to see. When was your first visit and what were your first impressions?

Karie: When I first visited the cemetery, I was pretty emotional. A co-worker of mine had recently died at a young age and I was very upset about it. When I walked into the gates of the cemetery, I looked around and my mood started to change. I didn’t see the place as sad or morbid. To me it was a peaceful, beautiful oasis and a place to celebrate life. I fell in love with it immediately.

Michael: On that first visit, I was interested in one person: Valentino. Of course, I saw Barbara La Marr, William Desmond Taylor, and Marion Davies. But there really is so much more to see, isn’t there?

Karie: There are tons of things to see! There is a story behind every single grave there. The cemetery has beautiful architecture, unique headstones and hosts a ton of creative people.

Michael: Tell me some of the highlights of your tours. Have you made any surprise discoveries?

Karie:  One of my favorite things is seeing the look of joy and excitement that people get when they see the grave of a star that was meaningful to them. One day I was giving a tour and speaking to a large group about Valentino.

There was a girl in the group who was about 20 years old. When I started talking about Valentino’s life, tears began pouring down her face. She finally turned around and ran out of the building. I was a bit shocked and couldn’t imagine what I could have said to upset her. I asked her boyfriend if she was ok. He said, “She just gets very emotional about Valentino.” It is a pretty big testament to his charisma and star power that ninety years after his death young girls still cry and react emotionally at his grave.

On another day I had an elderly lady who actually taught Jayne Mansfield’s children. She said that there were many celebrity kids at the school, and that Jayne was the ONLY famous parent who ever showed up in person. 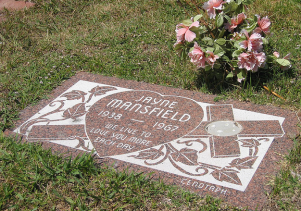 She said Jayne was active at the school and a really loving, caring mother. That was a beautiful story and certainly makes her seem much more human. While these people may be icons, sex symbols, etc. they are, in fact, people.

Michael: What questions do you get most from those taking your tour?

Karie: People often ask me about the peacocks and many of the graves with the faces etched into the marble. Those things add so much character to the place.

Michael: Yeah, I want to get to the peacocks in a minute. Any estimate as to the number of tours you’ve given?

Karie: I couldn’t even begin to tell you. I do about two or three tours a month and it has now been 14 years. That isn’t counting private tours, the special art deco tour and other things.

Back in 2013, I started getting kidney stones right before I gave a tour. I didn’t want to let the people down who had booked and I figured that the show must go on! I gave a 2 ½ hour tour with massive kidney stones. I was in so much pain that I really don’t remember very much. I have done the tour so many times that I sort of went on autopilot. I was rushed to Cedar’s Sinai right afterward.

Michael: What’s the most unusual monument or tombstone?

Karie: None of them seem unusual to me, but I think that Johnny Ramone’s grave seems to draw a lot of attention. I’ve given many tours to seniors who don’t even know who he is, but that can’t stop looking at his grave.

Michael: On a recent tour, I was looking for the grave of Mae Murray’s brother. I was almost attacked by a gigantic peacock. I’ve since seen their cages. I have to admit they are beautiful creatures. What’s the story behind them and their home at the cemetery?

Karie: Someone told me that the peacock is a symbol for eternal life. That would make sense because cemeteries are always filled with symbolism and nothing is just there arbitrarily. If you look near the flower shop, there are peacocks in the stained glass and even peacock feathers painted on the dome over the building.

Michael: What’s the story around the big, black car that sits up front?

Karie: That is an antique hearse that the owner Tyler Cassity purchased. I think it is from 1939. As far as I know it still works and is put to use. 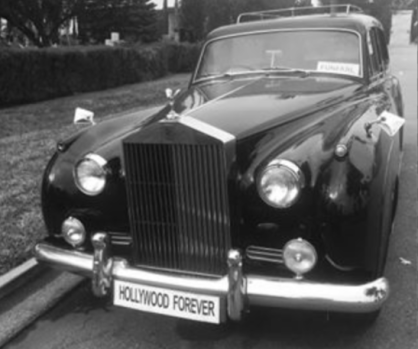 Michael: Are there any unmarked graves of silent film stars there? I believe Florence Lawrence’s grave was once unmarked, but she now has a marker.

Karie: Yes there are still unmarked star graves. Getting a marker can be a complicated process that involves getting permission from the family (if there are any still alive) and raising money. The cemetery has been great about helping make that process happen. I know that silent comic actor Ford Sterling was recently marked and Ann Sheridan was as well. Tyler and his staff recently got a marker for the grave of Pauline Pfeiffer Hemingway, Ernest Hemmingway’s second wife. Historian Allan Ellenberger does an excellent blog about Hollywood history and written about it. http://allanellenberger.com/sins-of-the-mother-the-story-of-pauline-hemingway/

Michael: Have all the film related graves, niches, and crypts been identified?

Karie: To my knowledge, yes they have been identified.

Michael: Are there any missing old timers that may be there?

Karie: Not that I know of. I always preface things by saying that, as you never know!

Michael: What mysteries are there? What are your favorites?

Karie: The grave of William Desmond Taylor would count as a mystery. It is one of the most famous unsolved murders in Hollywood history. There have been so many books about it, but I think it will always remain a mystery.

I love Valentino, but I feel a deep connection to all of the people there. I spend a lot of time at the cemetery and I’m very passionate about film history. There are so many pioneers buried at Hollywood Forever who were at the ground floor as the art form and business of Hollywood was being created. Many of them worked behind the scenes as writers, cinematographers, composers and crew.

Michael: I understand. My passion is researching the lives of those from the very beginning.

Karie: So many of these people go unappreciated. A great number of them were discarded and forgotten. They deserve better.

Michael: Have you ever met any relatives of some of the permanent residents of Hollywood Forever on your tour? Who were they?

Karie: Several years ago, I was giving a small tour and as I was at J

ohn Huston’s grave. I turned around and Angelica Huston was standing right there.
She was cleaning up the flowers and grass around her father’s grave. I didn’t want to bother her, but she was very gracious and a total class act.

Michael: If you were an early actor or actress died in Hollywood, what choices did you have? Rosedale, I know. What others?

Karie: Hollywood Forever (originally named Hollywood Memorial Park) was founded in 1899. Forest Lawn Glendale came along in 1906. Calvary Cemetery was established in 1896 and Evergreen Cemetery in 1877. I think that Home of Peace has been in their current spot since 1902. Grand View Memorial Park dates back to 1884. I’m sure there are others I’m forgetting, but those are the ones that come to mind.

Michael: Are there any haunted areas of the cemetery that you are aware of? Tell me the stories.

Karie: People often ask me that question. I’ve been there a long time and I’ve never had a paranormal encounter of any kind. There have been rumors that Clifton Webb walks down the corridor of the Abbey of the Psalms Mausoleum or that you can hear actress Virginia Rappe weeping.

To me, the history is fascinating enough and I really don’t want to focus on the paranormal. (By the way, read Room 1219 to learn more about Virginia Rappe, the actress who died after the party thrown by Roscoe “Fatty” Arbuckle. It is an excellent read!)

Michael: So, give the cemetery a little plug for my readers? Invite them to take the tour!

Karie: The “Cemetery of the Stars” tour at Hollywood Forever is a great overview of the cemetery. It includes the big names including Rudolph Valentino, Cecil B. DeMille, Marion Davies, Tyrone Power, Vampira, John Huston, Johnny Ramone, Peter Lorre, Mel Blanc and many more! Hollywood Forever is a beautiful place and one of the most unique cemeteries in the world! Learn more about dates and times for the tour at www.cemeterytour.com.

2 responses to “Life is Good at Hollywood Forever: A Chat With Karie Bible, Tour Guide”