In one month, I will be in the heart of Hollywood!  I’m making my umpteenth journey to the land of dreams, the city that never disappoints.  This trip is dedicated to researching my new book, Hairpins and Dead Ends: The Perilous Journeys of 20 Actresses Through Early Hollywood. It is a companion volume to my 2010 book, Dangerous Curves atop Hollywood Heels.

I’ve already imagined the cover.  Well, it’s a working cover. The publisher will most likely alter it in some way, but it’s a starting point. 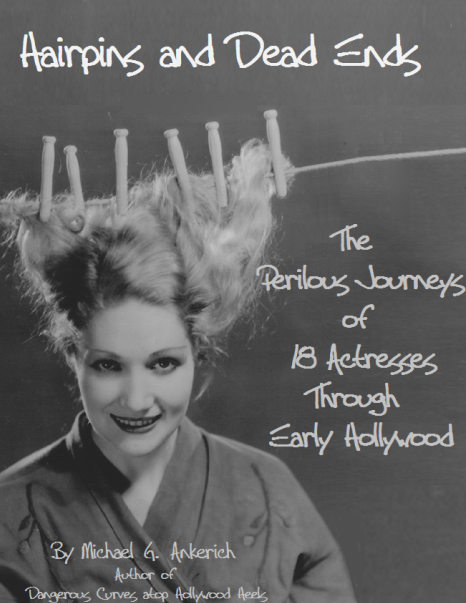 You may not know some of the names, but their stories, their journeys through early Hollywood, are riveting.

On my upcoming trip to Hollywood, I’m interviewing relatives, visiting their former homes, paying respects at their final resting places, and researching their contributions to film history at the Motion Picture Academy Library.  As a writer and journalist, it is important for me to visit the places where they lived, loved, and died. It helps me put together the puzzle pieces that make up their lives. Being there helps me understand who they were.

As I prepare for upcoming trip, I can’t help but reflect on my very first trip to Hollywood. It was in the mid-1980s.  I had just started my writing career as a newspaper reporter. I was also interviewing former silent film actors and actresses for a column I had in Classic Images.

Dorothy Revier was one of the first actresses I reached out to. I thought her Hollywood portraits were stunning. 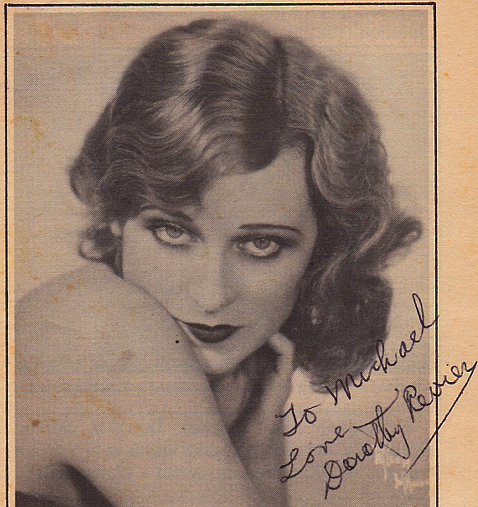 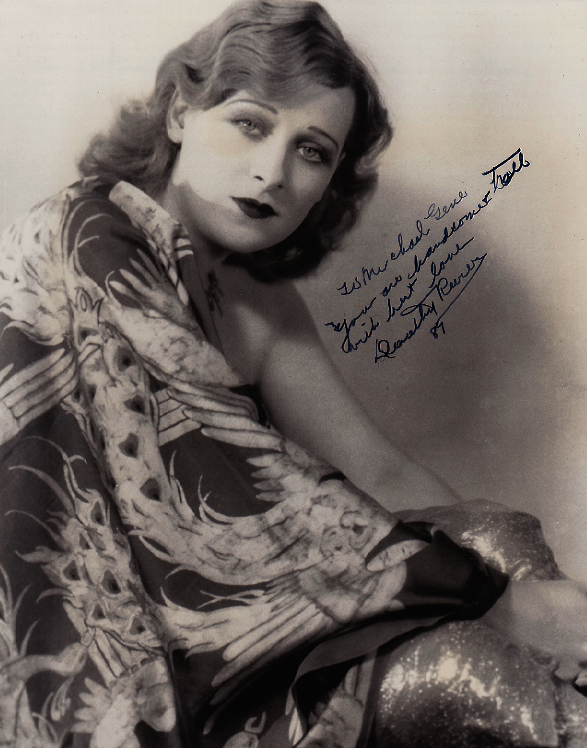 Although she was reluctant at first, we started a conversation, first through the mail, later by phone.  Here is her first letter. 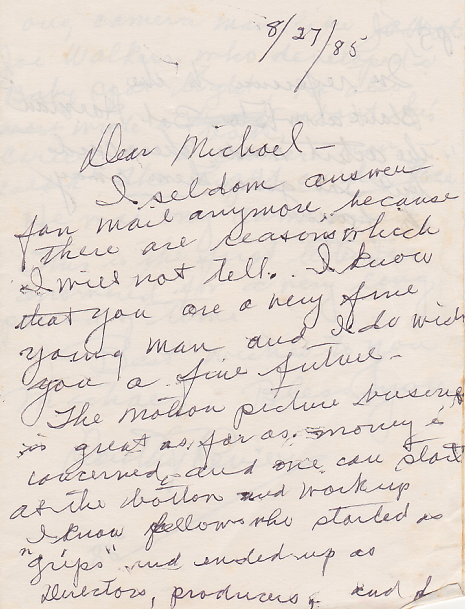 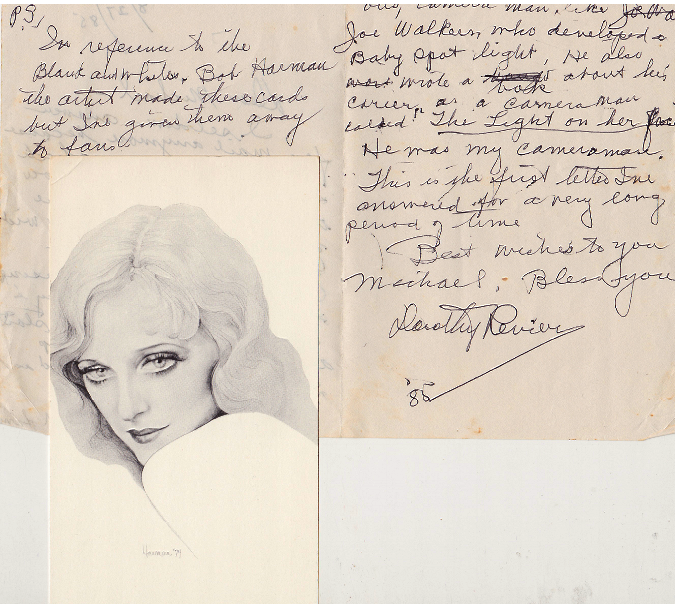 She lived a lonely existence, I suspected, in her little Hollywood apartment. She was estranged from her only child, a daughter. She maintained close relationships with her sisters and writer Richard Lamparski. Dorothy became a regular correspondent. She sent pictures of herself in 1986 and urged me to visit her, if I ever made the trip West. 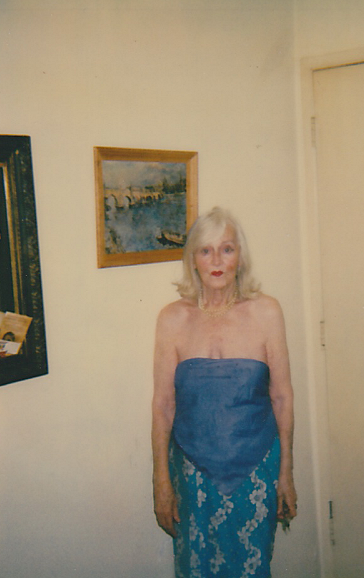 Dorothy Revier in 1986, a stunner still! 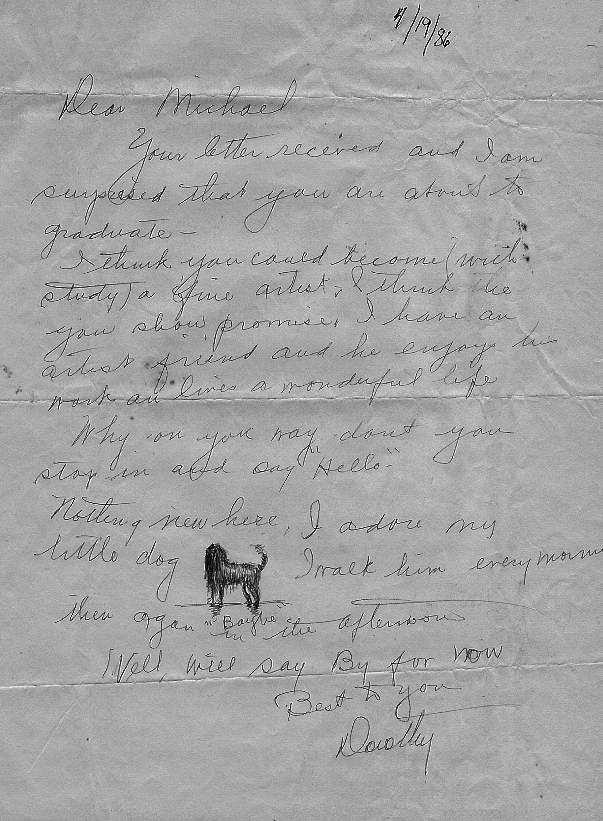 It was in the summer of 1986 that a trip emerged for me. I was invited to go with a theater troupe on their summer trip to Disneyland. I jumped at the chance.  Knowing nothing about southern California, I figured Disneyland was in the heart of Hollywood. It was actually over 30 miles away. It might as well have been a million. My sole purpose for joining the tour was to get to Hollywood, to see old Hollywood, to visit Dorothy Revier.

Fortunately, a writer friend of mine, Joyce (her last name escapes me), offered to pick Charlene (a co-worker from the newspaper) and me up at our hotel in Anaheim, drive us into Hollywood, and show us the sights.  Here’s what we did that unforgettable day in Tinseltown.

Knowing I was a Valentino fanatic, Joyce took us to Hollywood Memorial Cemetery (now Hollywood Forever) and to Valentino’s crypt. Who knew that Barbara La Marr and William Desmond Taylor were neighbors of Rudy’s? 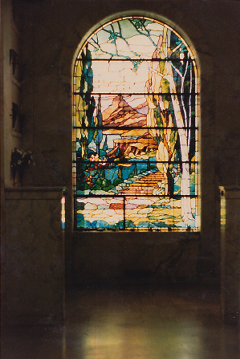 Approaching Valentino's crypt on the left 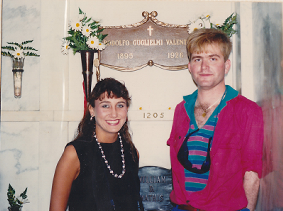 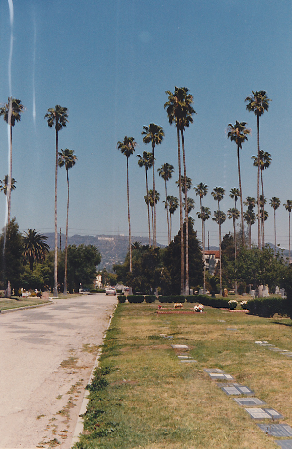 Hollywood Memorial Cemetery with the Hollywood sign in the background.

We to Paramount. I looked, but didn’t see Gloria Swanson. 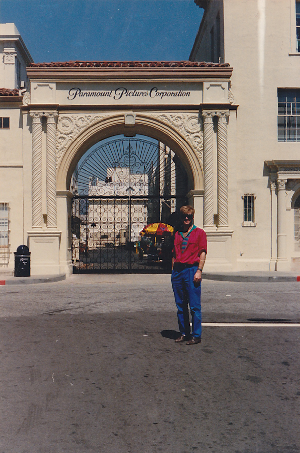 Michael at the Paramount gate.

Grauman’s Chinese Theatre was a must. I marveled at the foot and hand prints. 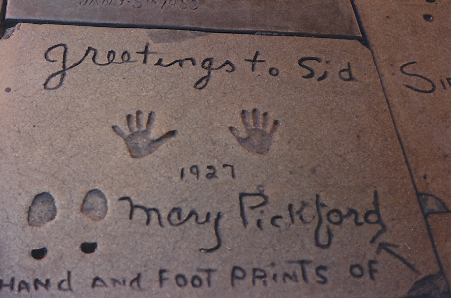 We had lunch at The Pink Panda on Orange Avenue. It’s probably long gone. 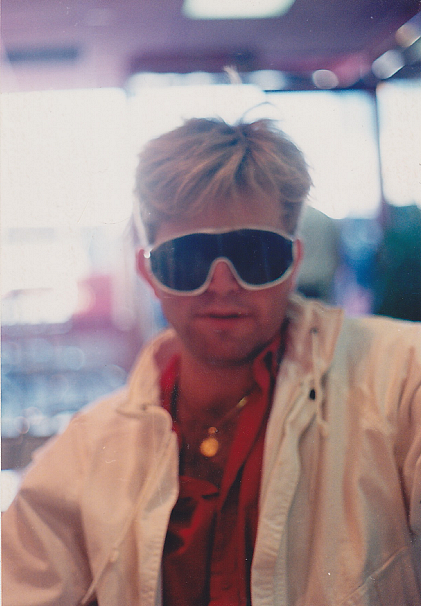 Well, the sunglasses WERE in style in the '80s.

Joyce drove us into Beverly Hills. The highlight was passing Lucille Ball’s home and driving up the long, winding street to Falcon Lair, Valentino’s famed home. The view from that street, Bella Drive, left no doubt, I had arrived in the land of my dreams.

Later in the afternoon, we pulled in front of 1275 North Havenhurst Drive. Dorothy Revier met us in the courtyard and invited us into apartment #6, her home.  Dorothy was gracious, fun, and outgoing. I had met and interviewed my first silent film actress. Her interview is featured in my book, Broken Silence: Conversations with 23 Silent Film Stars. 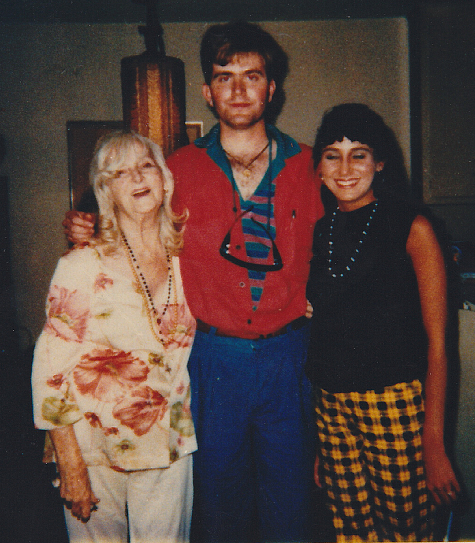 Later in the trip, I visited the Queen Mary ocean liner in Huntington Beach, but wouldn’t you know it, my sights were still on Hollywood. 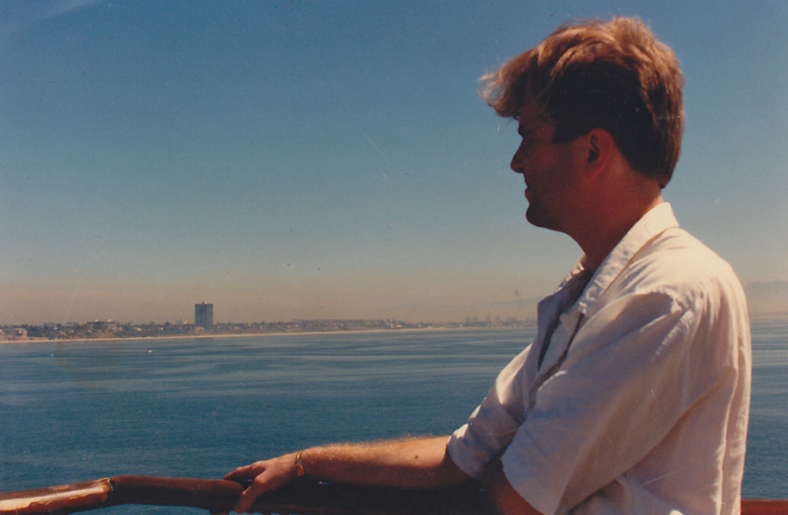 On the Queen Mary

I even got myself on the cover of a magazine. 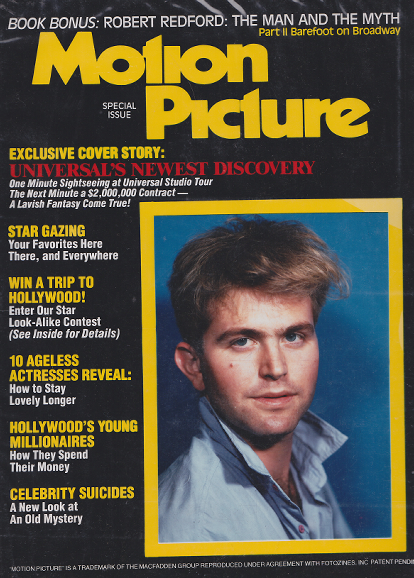 People are always asking, isn’t Hollywood a disappointment? True, it’s not what it was in the 1920s when Valentino was making hearts flutter and Mae Murray was striking poses with her bee-stung lips. But, it’s still there. You just have to dig a little deeper to see the Hollywood of the past. (As I write that last line, my heart is heavy with the news that plans are underway to raze Mary Pickford’s studio. Why do we Americans insist on destroying, nor preserving, our past?)

There would be many more pilgrimages to Hollywood over the years, but I’m kind of nostalgic.  You never forget your first time! 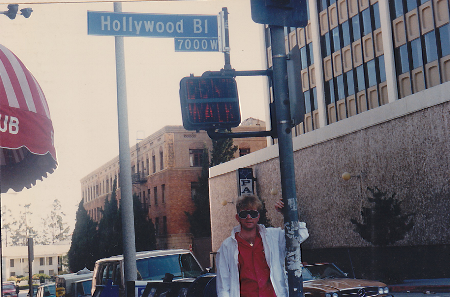