The highlight of my recent Hollywood adventure had to be the annual Valentino Memorial Service, an event that pays tribute to the life of Rudolph Valentino on the anniversary of his death,  August 23, 1926.  Not only was I there this year, I also had the honor of speaking about the friendship of Valentino and Mae Murray, who is the subject of my most recent book. 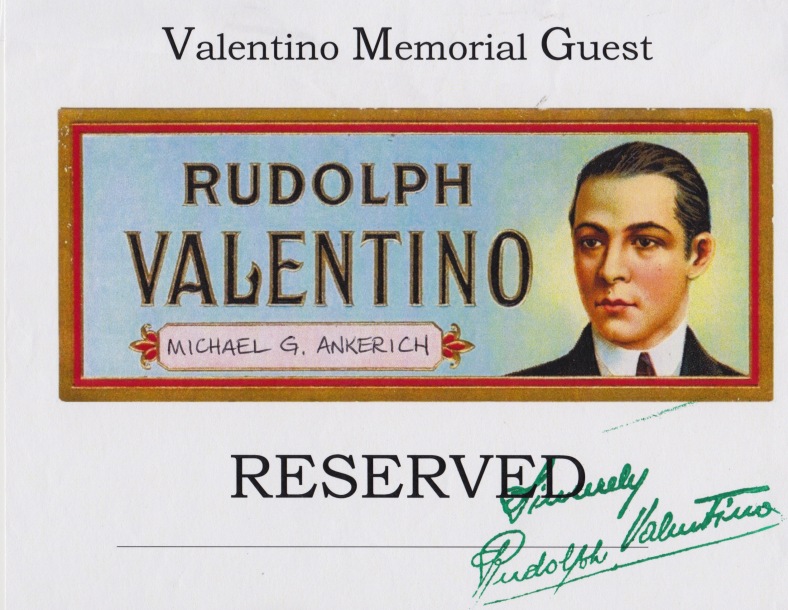 I had a reserved seat right up front. Incidentally, Valentino’s “autograph” was made by a stamp that once belong to Valentino himself. He used it to “autograph” photographs. It is now in Tracy Terhune’s awesome collection.

On my first trip to Hollywood way back in 1986, the first thing I had to see was not Universal Studios, the footprints in the cement at Grauman’s Chinese Theater, or even the Hollywood Sign. It was the tomb of Rudolph Valentino.  Since then, no trip to Hollywood has been complete until I have visited Hollywood Memorial Cemetery, now Hollywood Forever.

In a lot of ways, the event was like a reunion. I met many friends that I had only corresponded with through Facebook and email. I also made scores of new buddies. 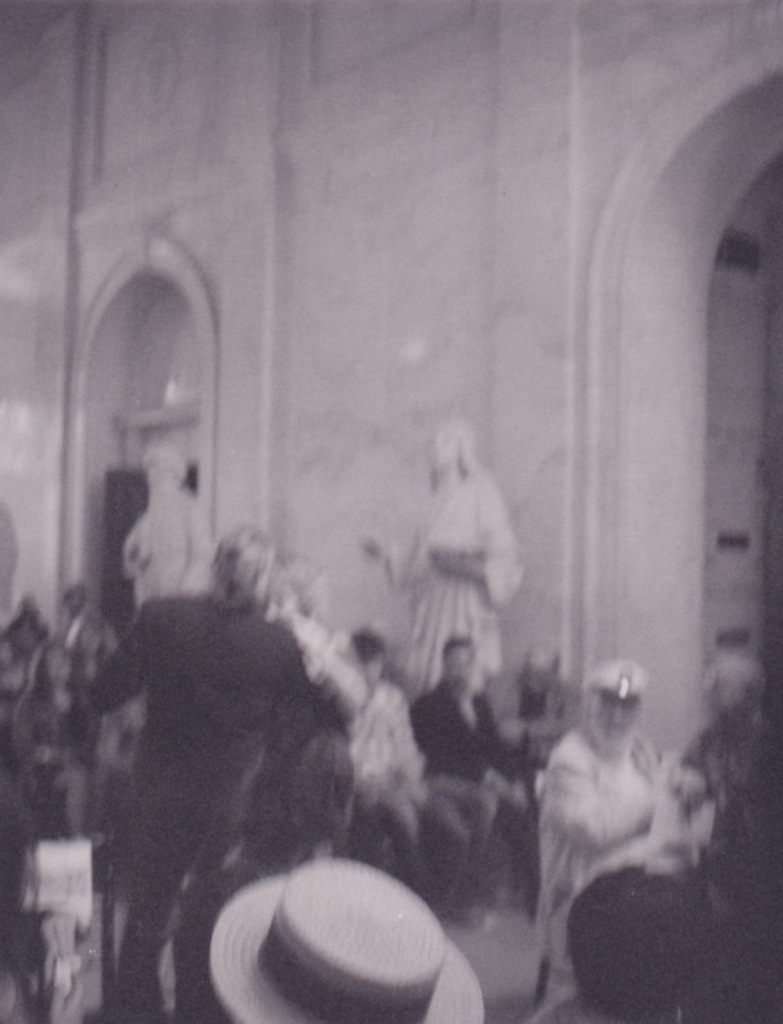 Chris Cipollini took this Polaroid photo during the service. The more I look at it, the more I think Chris captured a ghost or two

I enjoyed meeting and talking with actor Christopher Riordan, who is just as handsome and charming today as he was in television and films going back to the 1950s. He’s still active today in television and is working on his memoirs. 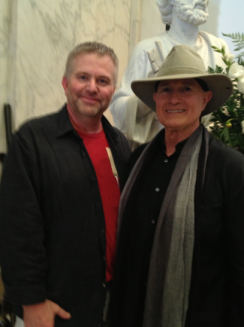 Christopher and Michael after the service 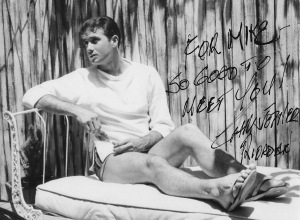 Christopher in a GQ layout 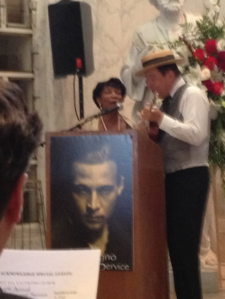 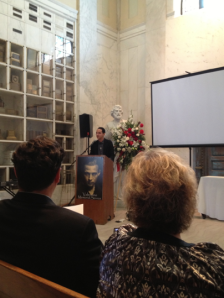 Chris Cipollini read his own piety 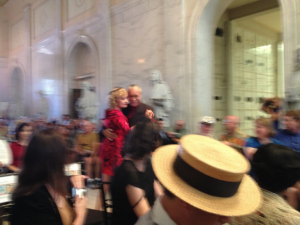 For those of you who didn’t make the service this year, I am providing a transcript of my remarks (in italics).  I intermingled a number of readings from Mae Murray: The Girl with the Bee-Stung Lips.

For those who didn’t get to the service this year, mark your calendar for next year! It’s a must! 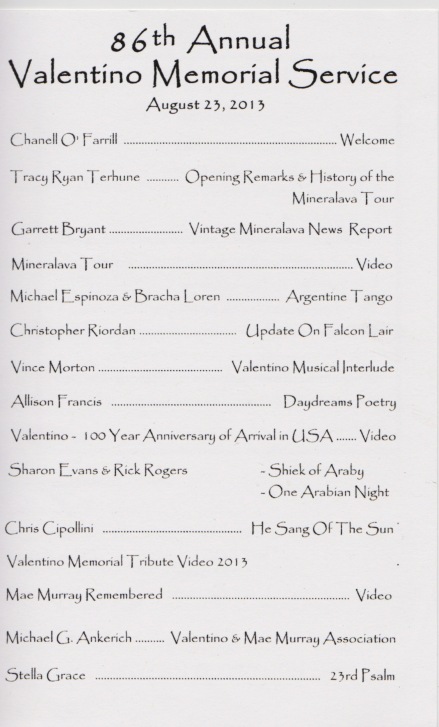 I bring you greetings from all the Valentino fans in Georgia. It is an honor for me to be with you.

I’ve been coming to LA for almost 30 years doing research and interviews for my books. On each of these trips, I’ve visited Valentino’s crypt. Sometimes twice or more in one visit. So I have lost count of the number of times I have been here.

My very first visit to Valentino’s tomb. This was the trip that I interviewed Dorothy Revier. But, first, I had to see Rudy’s tomb. 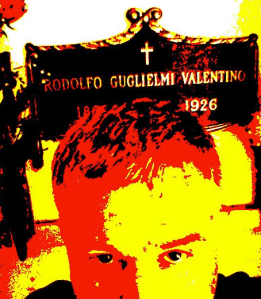 Another visit from several years ago

Today is different, of course. It’s usually just me, Rudy, Barbara (La Marr), William Desmond Taylor, and a few others hanging and floating around.  I can usually hear my footsteps echoing down the corridor. Today, the room is full and I am a little nervous.

I want to talk briefly about Valentino’s friendship with Mae Murray, who is the subject of my new book.

Their friendship was a unique one. It lasted from the day they met until his death in 1926. About 13 years.  Longer than any of Mae’s four marriages.

They met while they were both dancers in New York.

“It was while out with Olive Thomas at the Knickerbocker one afternoon that a young Italian caught Mae’s eye. She pointed him out to Olive.  ‘Damn beautiful, isn’t he?’ Olive said. 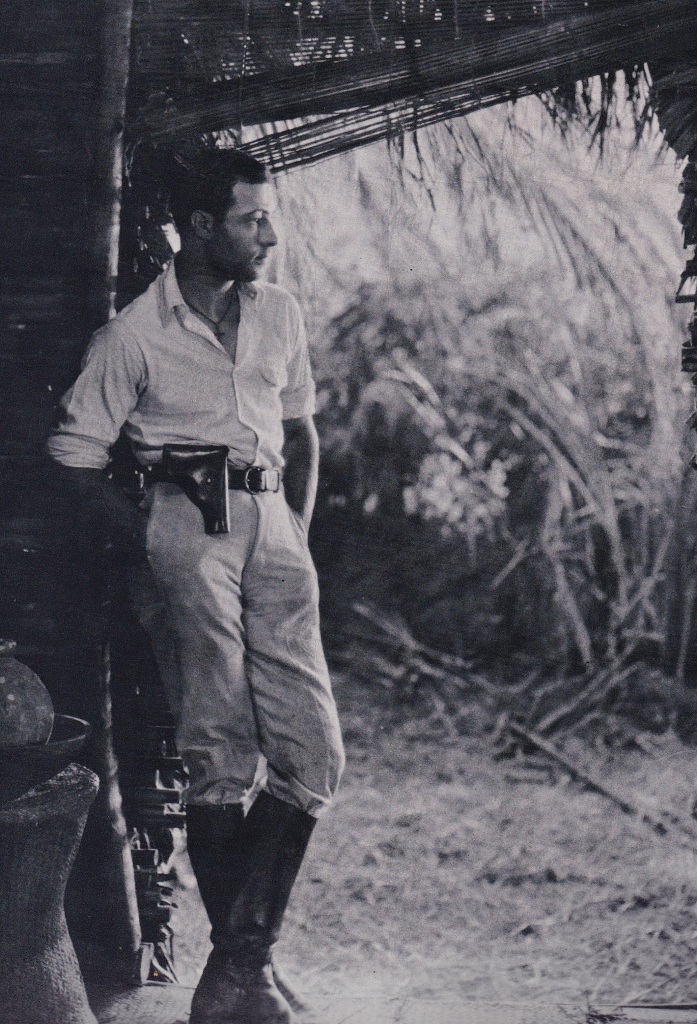 ‘He was a magnificently built man and his disposition was as delightful as his physique,’ Mae remembered. ‘Just to see his expressive hand lying on the back of a chair was art. Rudy and I had a unique understanding. We were attracted to each other from that first afternoon. Call it sex if you will, but more correctly, call it a dancing friendship, which is why our bond lasted.’

Their paths went in different directions when Mae came to California to make films in 1916.

Mae used to take credit for discovering Valentino for the movies when they worked together in The Delicious Little Devil and The Big Little Person. He was, however, already working in films when they became reacquainted.

She had always been attracted to Valentino. She especially liked the Latin lover type. She urged him, on the set of The Delicious Little Devil, to take charge of his magnetism.

‘Because magnetism is like a light,’ Mae told him. ‘Some people have a 60-watt bulb. Some have 150 watts. You have a full one hundred and fifty. Never doubt it.’

In the fall of 1924, two monumental events happened in Mae’s life. She was awarded the starring role in The Merry Widow and she divorced Robert Z. Leonard, her husband, director, and business partner.

After the filming wrapped on The Merry Widow in May 1925, Mae took a walk on the wild side. She was back and forth to Europe and was rather reckless in her personal life. Perhaps it was inevitable that her friendship with Valentino exploded into passion. The press hinted at marriage. Their responses are telling.

‘Marry again? Absurd!’ he said. ‘While I am what you might call domesticated, I have observed that a man in my profession is happier when he is single. I have no present intention of marrying Miss Mae Murray or any other woman.’

Mae was a little more cryptic. ‘Everybody just loves Rudy.’ ‘Do you?’ a reporter asked. ‘Ah — you see — I think he’s wonderful. Of course, I have to admit that marriage is possible. Tomorrow, who knows what might happen. Rudolph and I are very old friends. We knew each other before we went on the screen–when we were both dancers.  Why we’re childhood friends. Sweethearts?  Well — ‘

Somewhere along the way, Mae, as her nephew so eloquently put it, ‘got knocked up’ and slipped away to Paris to give birth to a son. She returned alone to the States, an unwed mother, a major Hollywood star, a gullible, vulnerable woman, desperate for love and attention.

You know the story. Prince David Mdivani stepped in to fill the void — and his pockets. He became her fourth husband. 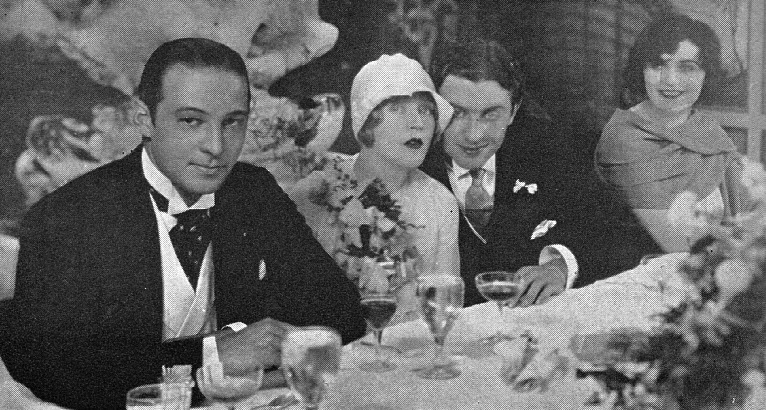 The day she said, ‘I do,’ Valentino invited the bridal party to his Falcon Lair estate. The two rode together to the church. On the way, Rudy leaned over to Mae. ‘Do you really want to do this?’ he asked.

With Pola (Negri) as maid of honor and Rudy as best man, Mae became Hollywood royalty.

Only two months later, Hollywood lost its greatest lover. Mae said she had lost her soulmate.

‘Rudy Valentino has become an immortal,’ she later told a radio interviewer. ‘While many didn’t see him or know him, they, through the years, have felt him because he was a true mystic. I don’t mean a sanctimonious mystic, but a force. With us, it was an even deeper quality because I think I have a little mysticism in me, too.

Mae blamed her friend’s death on his professional ups and downs and his torrid personal life. ‘You can be hurt so deeply in life, she said in 1960. ‘He, like me, had a few enemies who wanted to destroy him, and he was super sensitive, just like John Gilbert. I thank God that what happened to me didn’t take my life. It was a hard fight, but it didn’t take my life.’

I believe Mae was at Valentino’s funeral, but I wonder whether she came here to mourn his loss over the years. She had connections here. Both her brothers are here, but she attended neither funeral.  That is, however, another story for another day. 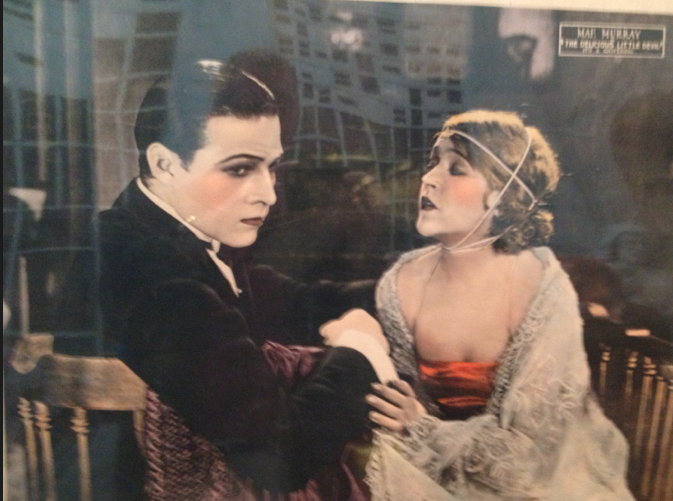 After the memorial, we all drove over the hill to Tracy’s home in North Hollywood. Here’s a peek into the afternoon festivities. 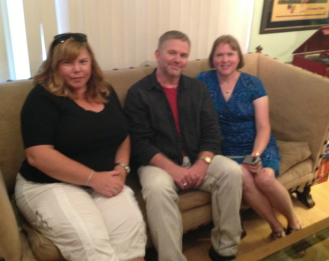 Caroline Rupprecht, Michael, and Rebecca Eash get acquainted while sitting on Valentino’s sofa 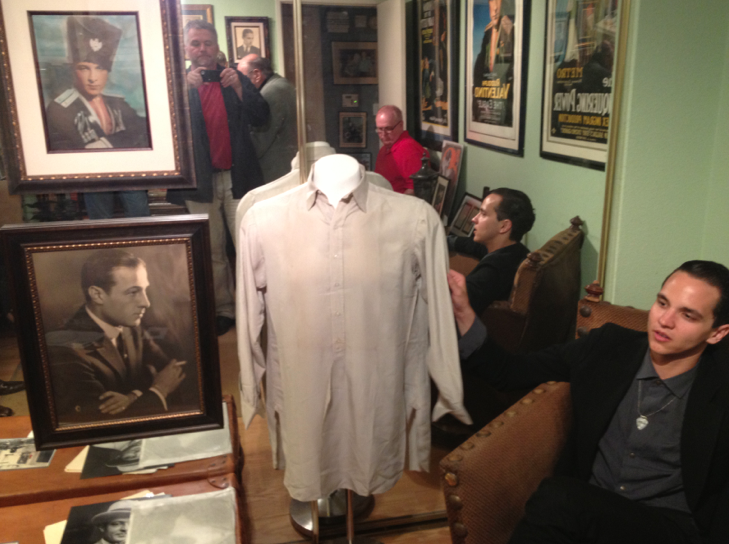 Chris Cipollini poses in Valentino’s chair and with his shirt 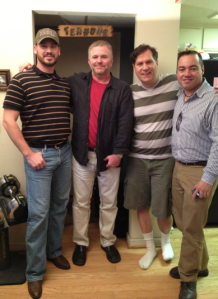 Here I am with Jeremy Terhune, Tracy Terhune, and Frank Labrador

If you haven’t already, check out Tracy’s book, Valentino Forever: The History of the Valentino Memorial Service. 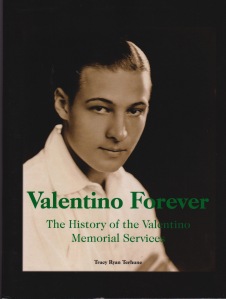 Tracy and everyone involved in this great event, thanks for a lovely time and for the fitting tribute to the life of Rudolph Valentino. 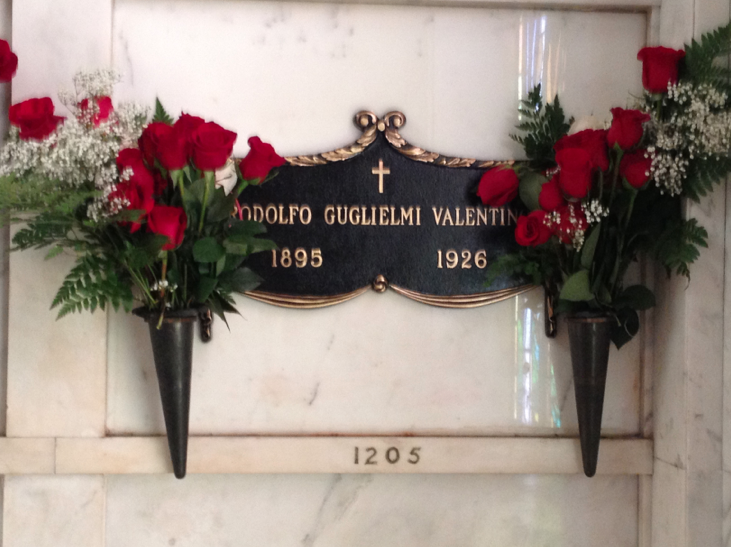